*Warning, this post contains images some may find disturbing. Don’t keep scrolling if you are sensitive to medical photos.

So here goes nothing, I’m putting it all out there. Here are all the gory details.

Recap of how we got here to this moment: years ago I was told by my family doctor I had fibroids in my uterus but was never told how they could/would evolve or even if it was something I should keep an eye on. All I ever worried about was getting pap-tests to make sure I didn’t have cancer. I didn’t have cancer so, in my world all was good.

Then over time, my lower stomach area got bigger and bigger which I thought was all part of getting older. WRONG. Plus, I have never been flexible so when bending over got more challenging I blamed myself for not keeping up with stretching or my lack of dedication to yoga. WRONG. Then my period, it was always “normal”, always every 28 days and no issues until the last 2 years where it became all consuming, BUT again I brushed it off because everyone said “you are perimenopausal”. WRONG!

And then there was this photo shoot. We were taking pics for work and I decided to wear 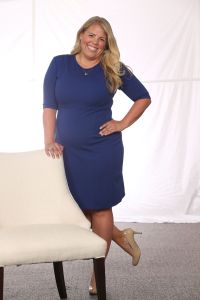 a fitted dress and honestly in my head I said “It’s OK that your stomach isn’t flat anymore, embrace who you are and you are OK with who you are” which is how I try to live my life every day but to be honest, in this picture I am also wearing 2 layers of Spanks. Look at my stomach, this  picture is unedited and you can clearly see my stomach area looks pregnant even with heavy duty compression.

Then there was my bunk gallbladder, thank you for being terrible! Without you I wouldn’t be here! Thanks to the stones in my gallbladder it triggered an ultrasound and the discovery of my extraordinary uterus. I had my gallbladder out the week before Christmas 2018 n an emergency surgery because the stones had gotten infected and then on January 23rd, 2019 I would have my hysterectomy surgery where I believed I a single fibroid thatt had grown to 10 cm.

Here is the play by play of my hysterectomy.

My husband and I arrived at the hospital at 10am, by 1pm I was in the OR holding area, my doctor came to chat with us and Derek (my husband) asked him “How big is the fibroid now?” to which Dr. Sheridan replied “It’s about 21 cm now” WHAT!!! OK that was not what I thought but it’s all starting to sink in that perhaps I am actually sick. *Note nervous smile below. 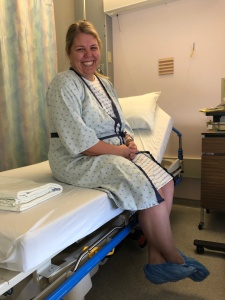 The surgery lasted about 3 hours, when I got back to my room I was super drugged out and in terrible pain. The nurse told me the incision was bigger than originally planned and that there were over 25 staples holding me together.

The next morning at the crack of dawn in walked my doctor and the first thing he said to me was “Boy, do I have a story for you….wanna see some pictures?” UM YES! As it turns out my uterus was HUGE! 6 pounds huge, over 30 cm huge and had grown up and over my belly button. It had pushed my bowels out of place and forced all of my lower organs out of their comfort zone. Dr. Sheridan said in the 27 years that he’s been a doctor he’s only ever seen one has big as mine. In a surgery like this they use a cork screw (yes, like the kind for opening a wine bottle) to pull out the uterus, they had to use 2 to get mine out (something her had only every had to do once before). He said they tugged, tugged and tugged thinking after one pull it would just pop out, nope! To put it in perspective, the average uterus weighs between 5.5 to 6 ounces and should look like an upside down pear. Mine had grown completely out of control and he said it was like I was pregnant for years. Here she is! 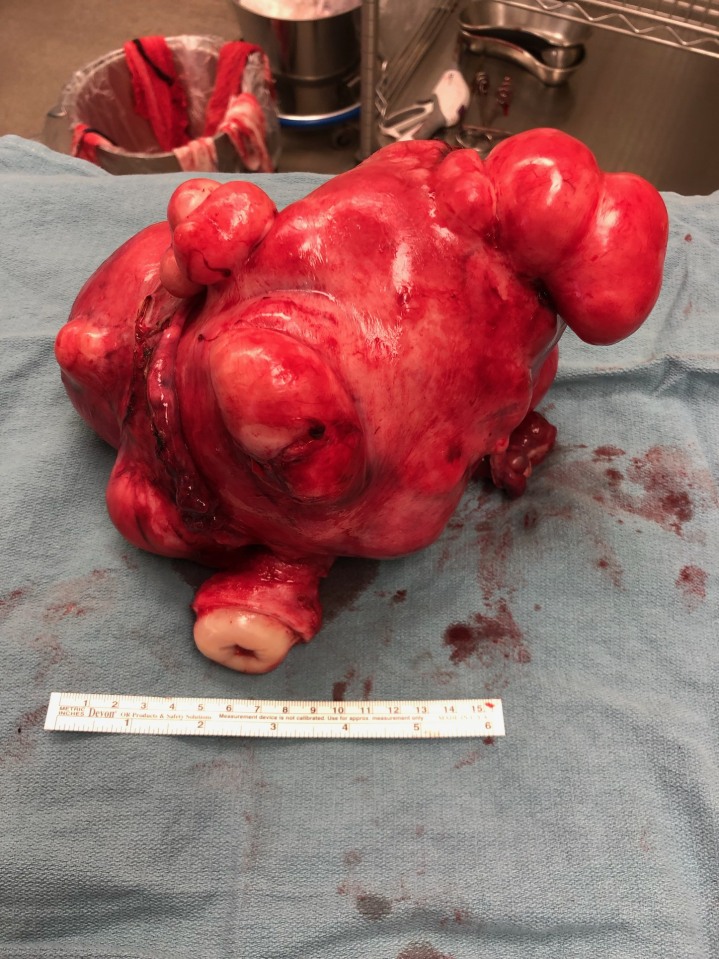 That first day post-op was a revolving door of doctors and nurses who were in the OR with me and they all had the same question “You felt no pain? You had no idea that was living inside you?” and the answer was NO! But now looking back the signs were all there!

Trouble bending over, constantly feeling tired, upset bum all the time, never feeling good were all not as I thought “just getting older” or “not taking working out enough” – I had a monster growing inside me.

It’s been 5 weeks since my surgery and it’s still tender, I am not quick yet to go from sitting to standing but I am so unbelievably excited for the future. I realize now, I haven’t known “healthy” for years and I can’t wait to see myself in 6 months from now. The human body is amazing and watching the changes in the past few weeks has been incredible.

I am not grossed out by my 6 pound uterus, I am impressed with myself that I kept running marathons, mountain biking with 6 pounds of dead weight hanging off of me and most of all that I didn’t let the norms of society make me believe I didn’t belong on TV, big belly and all.